The Government Procurement Rules help to support good practice for the sourcing of goods and services. The Rules apply to government departments, NZ Police, NZ Defence force and most Crown entities, and other government agencies are encouraged to follow them.

The Ministry of Business, Innovation, and Employment (MBIE) recently consulted with agencies, suppliers and the public to get feedback before presenting suggested amendments to Government. The consultation process, which ended on March 5th 2019, allowed interested parties to have their say on what should be included within the revised guidelines.

*We would like to thank OraTaiao for their inspiration and suggested wording within several parts of this submission- incl. questions relating to carbon footprint that should be asked of good and services suppliers as part of the tender process.

Best practice in planning is a crucial component of effective procurement policy. In particular, consideration of the leveraging of both priority and broader outcomes via innovative and forward-thinking procurement rules/policy is paramount.  One of the most important outcomes that can currently be supported via forward-thinking federal government procurement is the transition to a low emissions economy in NZ. This would provide our government with an incredible opportunity to act as a world leader in this regard.

Explanation: "Broader outcomes are the secondary benefits which are generated due to the way a good or service is produced or delivered. These outcomes can be social, environmental, cultural or economic. We intend to introduce a new rule which requires agencies to consider, and incorporate where appropriate, broader outcomes when purchasing goods, services or construction works. This new rule explains broader outcomes and compels agencies to use procurement to create wider benefits."

The government has taken a positive step forward in requiring agencies to at least consider those social, environmental, cultural or economic outcomes that stem from their purchasing of goods, services, or construction works. The fact that government is taking into account the emissions associated with new vehicle purchases, as relating to the priority outcome of transitioning to a net zero emissions economy, is also highly positive.

The broader outcomes rule should, however, be applied across any and all government procurement contracts, given that the government has communicated its aim to transition to a net zero emissions economy.

Beyond what is written here, we hope that specific information would be supplied with respect to the incorporation of broader considerations 'where appropriate' (i.e. are there pre-determined criteria in relation to this? Will there be some kind of independent or overarching oversight, or will agencies themselves decide when broader considerations warrant incorporation in one way or another?)

All goods and services suppliers should, at the very least, be asked the following as a component of the tender process:

It could be that answers to these questions are assigned points based on pre-established criteria, and that this is considered as part of the overall scoring process for tender applications.

We would also hope that the government’s assignment of specific sectors wherein the priority outcome of ‘transitioning to a net zero emissions economy’ must be implemented would be based on the most up-to-date scientific literature.

The agricultural sector in NZ is a highly significant contributor to greenhouse gas (GHG) emissions, contributing just under half (49%) of our country’s overall GHG emissions.

As per previous comments, the agricultural sector in NZ contributes just under half (49%) of our country’s overall GHG emissions.1

Procurement contracts for food should certainly include a climate change impact assessment. Furthermore, mandated implementation of the priority outcome ‘transitioning to a low emissions economy’ should be assigned to major federal government food purchase contracts.

Importantly, effective food procurement strategies by government agencies (i.e. that work to significantly lower emissions) must involve consideration of more than what is being done by potential food suppliers in terms of lowering GHG emissions. Government agencies must also consider those GHG emissions that are embodied within foods themselves (i.e. Which foods are significantly more GHG-intensive to produce, and which foods are ‘climate-friendly’?)

Importantly, the livestock sector alone is estimated to be responsible for approximately 14.5% of annual global GHG emissions, a higher share than all forms of world transportation combined.2 This figure aligns with estimates by both the Environmental Protection Agency and the Intergovernmental Panel on Climate Change.3

Here in NZ, a staggering 93% of total agricultural emissions, and 45% of NZ’s total national GHG emissions, are attributable to livestock production alone (including cattle, sheep, and deer).4

Red meat is known to have a large climate impact and contributes more to NZ’s diet-related emissions than any other food. Like red meat, processed meat is one of the most climate-intensive foods currently available. In contrast, whole plant foods, including vegetables, fruits, legumes, and whole grains, are far less emissions-intensive than the vast majority of animal-based foods, particularly red and processed meats.5

A 2017 Organisation for Economic Co-operation and Development (OECD) report concluded that NZ’s established growth model, primarily based around animal agriculture, is nearing its environmental limits, with increasing climate, freshwater, and biodiversity impacts.5 According to this report, continuing to rely on GHG-intensive livestock production is at odds with achieving NZ‘s commitments to the Paris Climate Agreement. The authors further state that exemption of the agricultural sector from mitigation efforts not only makes it more difficult to achieve climate goals, but also unfairly burdens other sectors.6

A Vivid Economics report was released shortly thereafter, which was commissioned by GLOBE-NZ (a cross-party group comprised of 35 NZ MPs). The report described different pathways that NZ could take in order to reach net zero emissions in the second half of the century. Along with decarbonisation of the energy and transport sectors, substantial afforestation, and assuming both the fruition of technologies and increased productivity within the agricultural sector, all scenarios required significant reductions in livestock numbers.7

The government‘s focus on technological advancements in the agricultural sector certainly requires challenging,8 as such advancements are not expected to be possible within the time-frame set out by NZ‘s commitment to the Paris Climate Agreement (i.e. to reduce GHG emissions to 30% below 2005 levels by 2030).9,10

It is also important to recognise that widespread decreased consumption of agricultural products that are known to be particularly GHG-intensive (e.g. red and processed meat) has greater potential to reduce emissions than do actions aimed at the supply chain itself.11 In so far as various agencies procure significant quantities of food for public consumption on a regular basis, the government should, at very least, be providing people with climate-friendly food choices that are consistently available.

Fortunately too, there is significant overlap between climate and health benefits, as related to eating pattern choices. According to the 2019 EAT-Lancet Commission on Food, Planet, Health, increasing consumption of whole plant foods (e.g. vegetables, fruits, legumes, whole grains), while greatly reducing consumption of both animal-based and highly processed foods, presents a significant opportunity to mitigate the impacts of climate change, while improving health outcomes.12

It has been estimated, for instance, that reducing animal-based food intake and increasing consumption of plant-based foods in line with global dietary guidelines from both the World Health Organisation and the World Cancer Research Fund could, by 2050, reduce diet-related emissions by between 29-70% and global mortality by as much as 10%.13

Food purchase planning within various agencies should expressly take into account the ways in which menus and catering services might be re-aligned so as to at least offer climate-friendly (and healthy) plant-based meal choices. It is my hope that the government would take advantage of, and help to promote, climate and health co-benefit opportunities associated with population-level intake of eating patterns that are more plant-based.

Government agencies should therefore strongly consider ways in which menus and catering services might be re-aligned so as to at least offer climate-friendly (and healthy) plant-based meal choices. It follows that procurement contracts themselves might be partially determined by such a shift, depending on the extent to which foods themselves are prioritised.

11.  FAO and FCRN. Plates, pyramids, planet: Developments in national healthy and sustainable dietary guidelines: a state of play assessment. Rome: Food and Agriculture Organization of the United Nations and The Food Climate Research Network at The University of Oxford; 2016.

13.  Springmann M, Godfray HCJ, Rayner M, Scarborough P. Analysis and valuation of the health and climate change cobenefits of dietary change. Proceedings of the National Academy of Sciences of the United States of America. 2016;113(15):4146-51.

The New Zealand government's procurement rules are being revised for the first time since their inception in 2013. 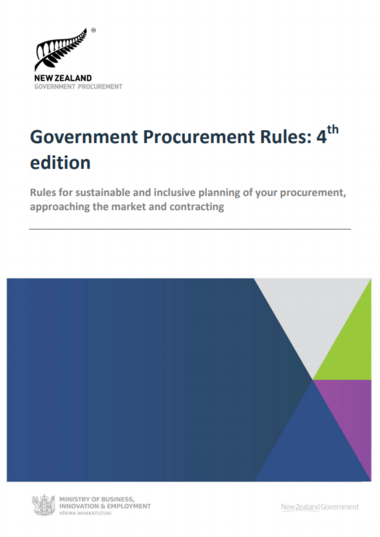