Dietary Guidelines
Which countries have included sustainability
within their
national dietary guidelines? 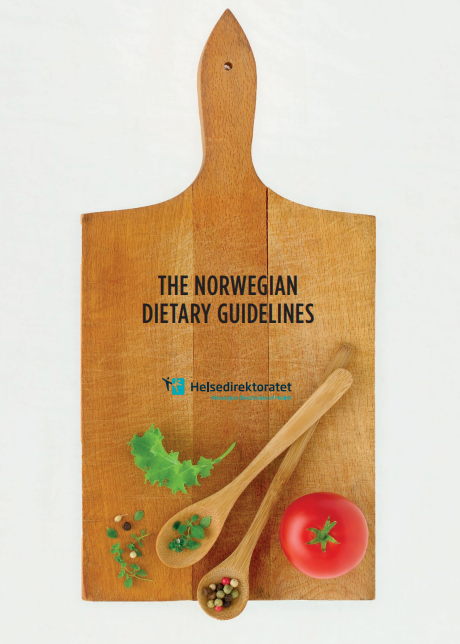 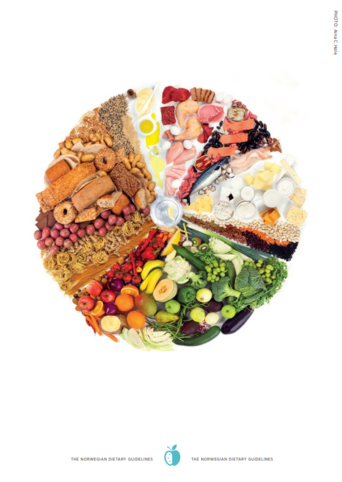 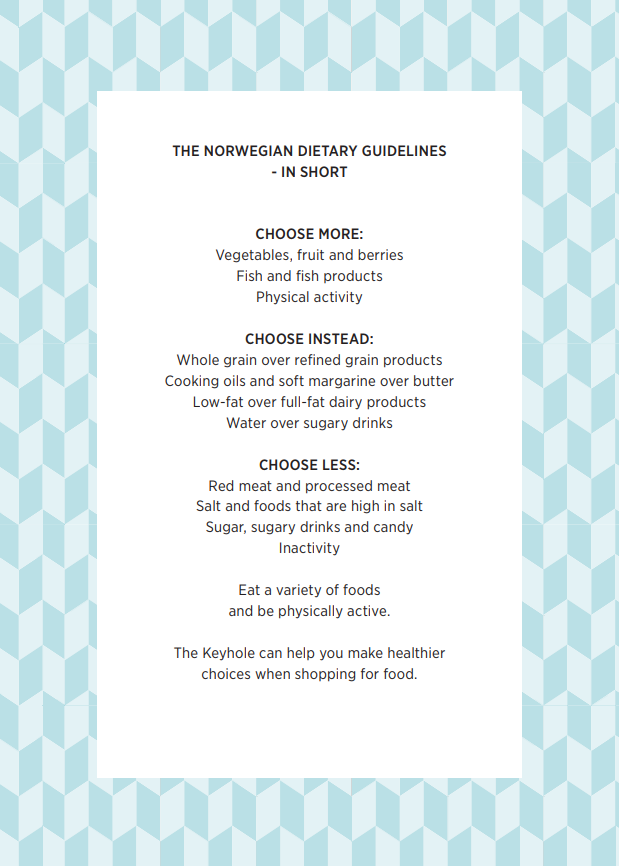 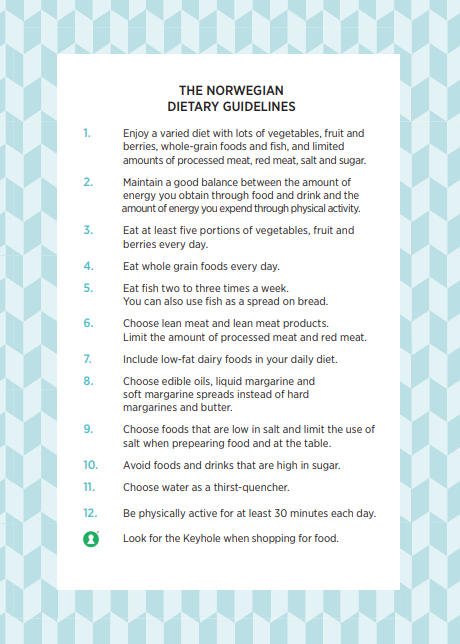 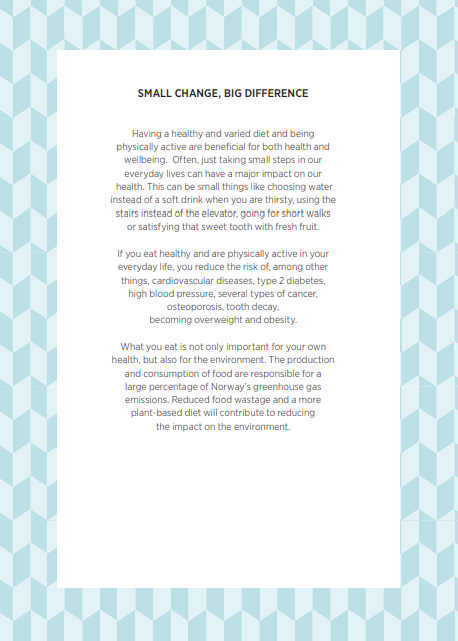 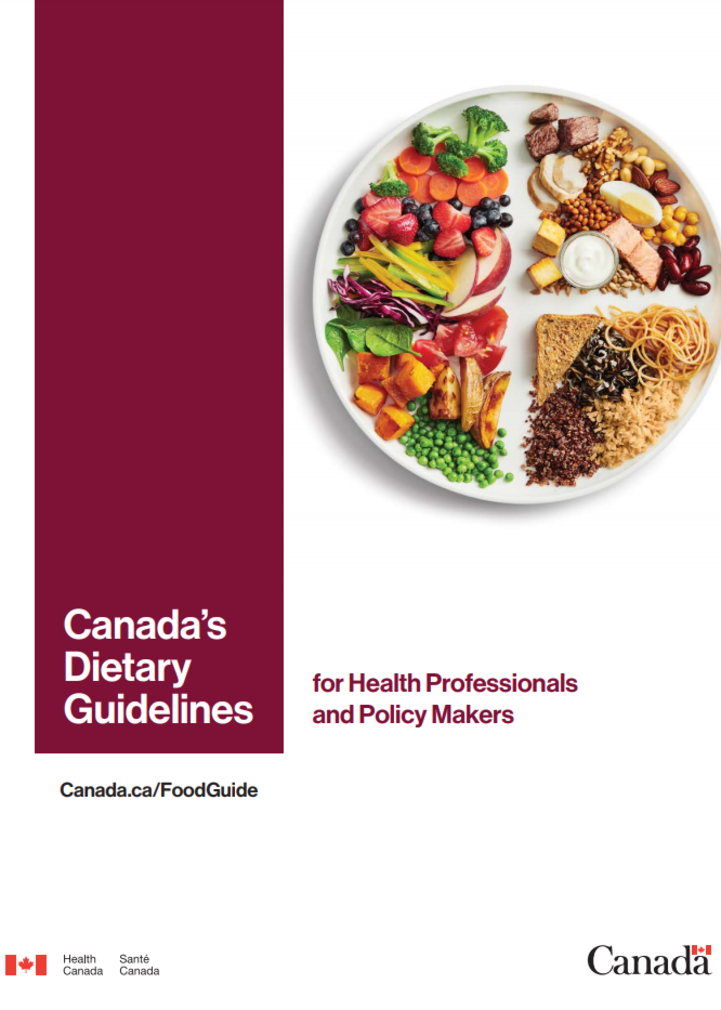 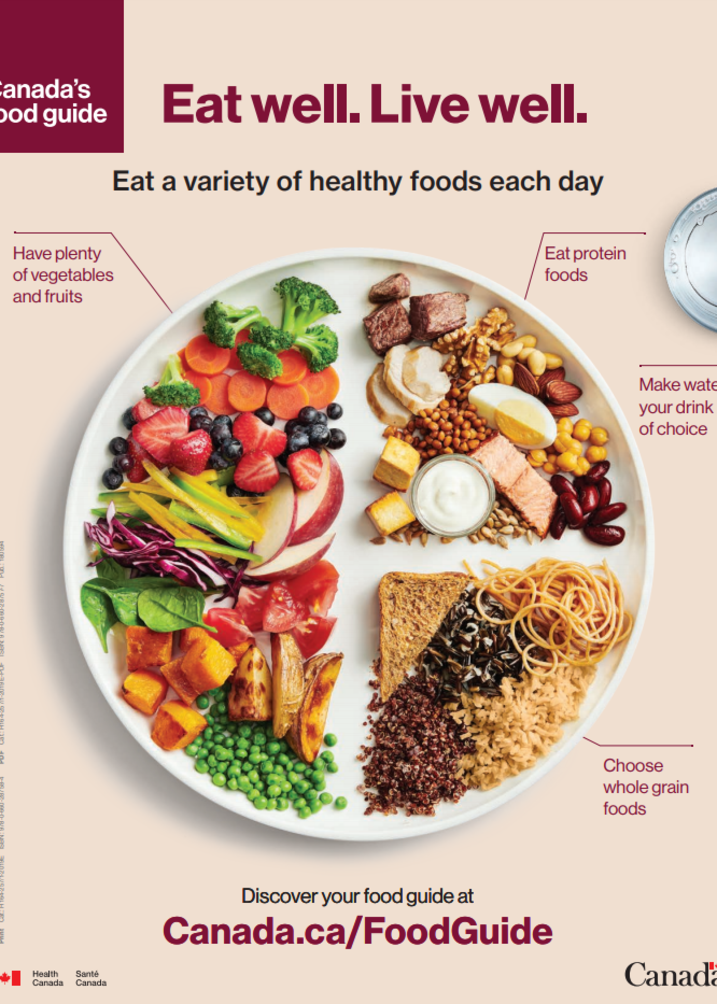 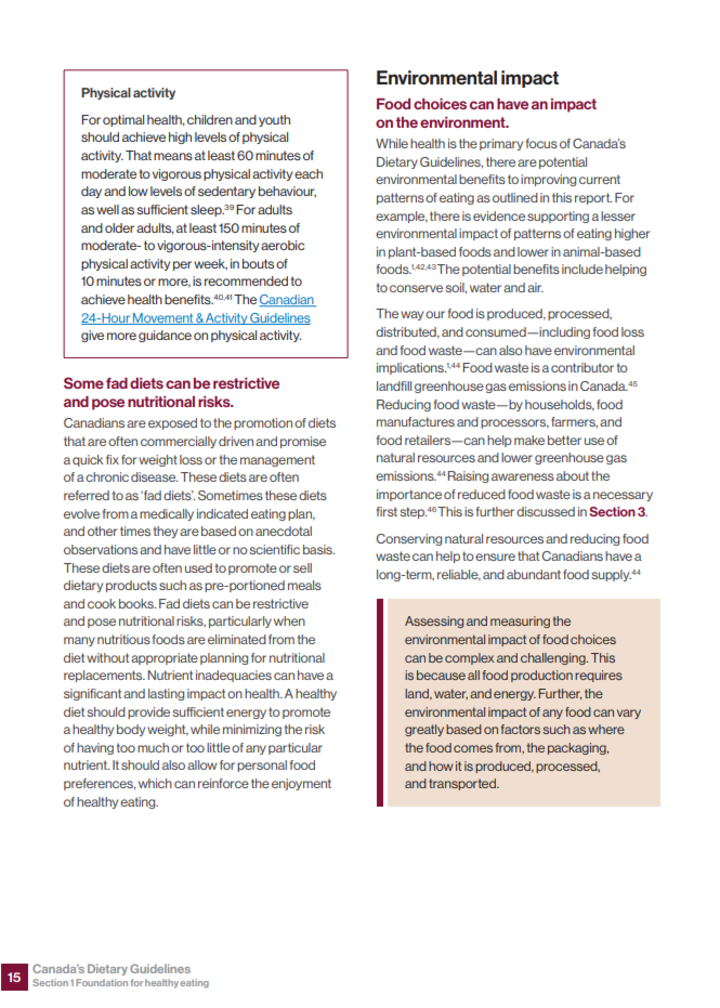 While health is the primary focus of Canada’s Dietary Guidelines, there are potential environmental benefits to improving current patterns of eating as outlined in this report.

For example, there is evidence supporting a lesser environmental impact of patterns of eating higher in plant-based foods and lower in animal-based foods. The potential benefits include helping to conserve soil, water and air.

Conserving natural resources and reducing food waste can help to ensure that Canadians have a long-term, reliable, and abundant food supply." 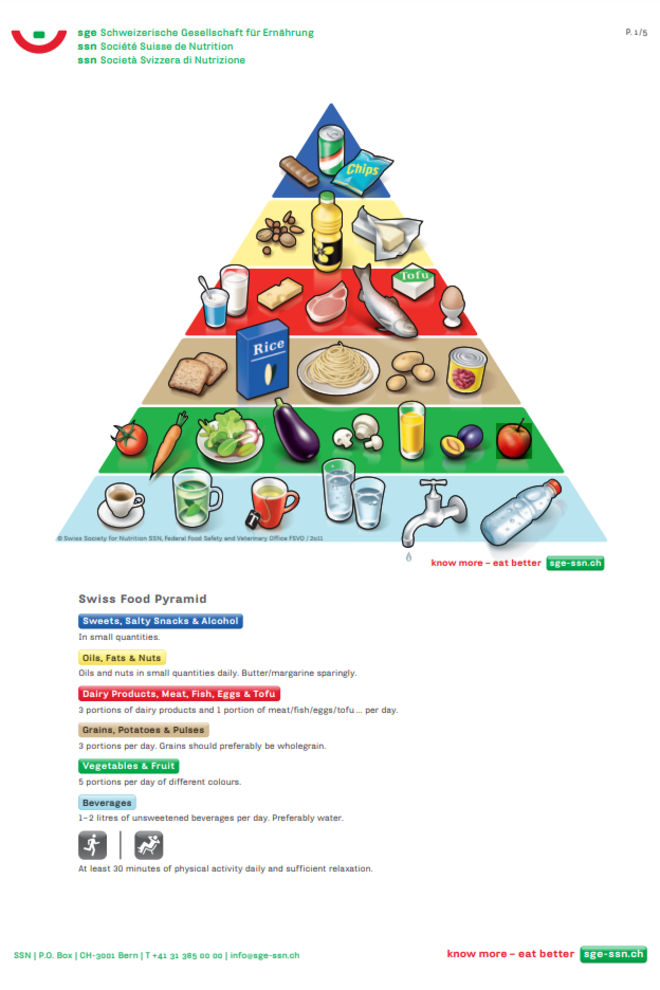 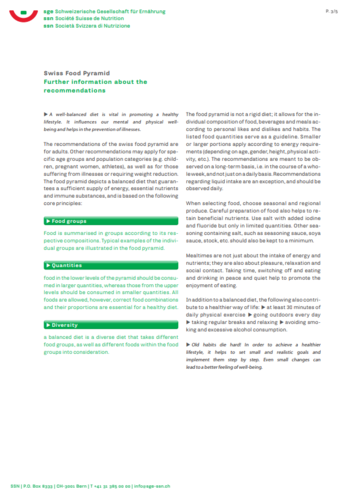 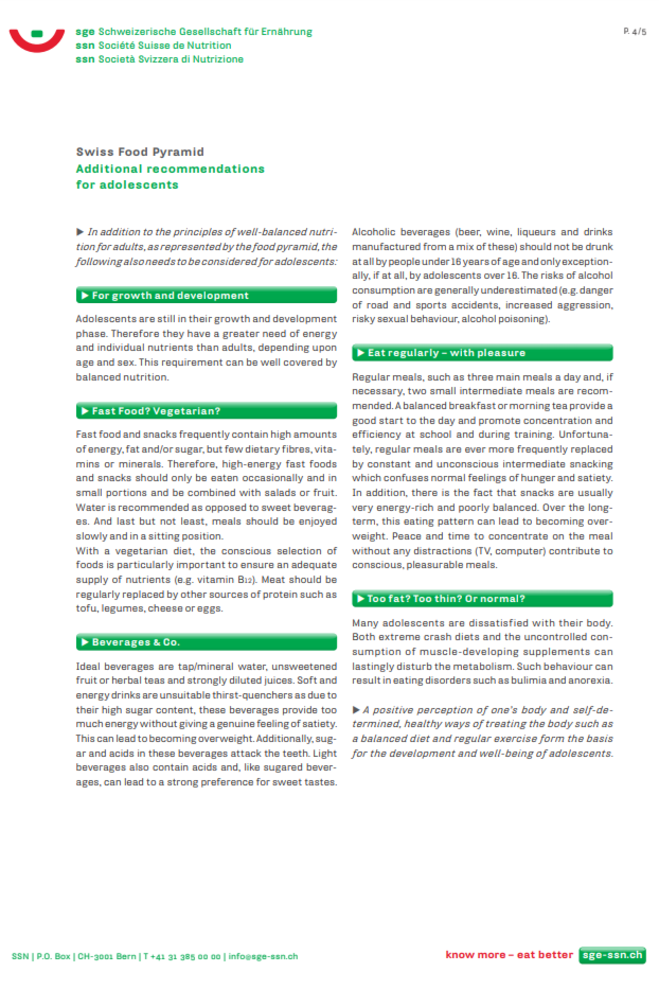 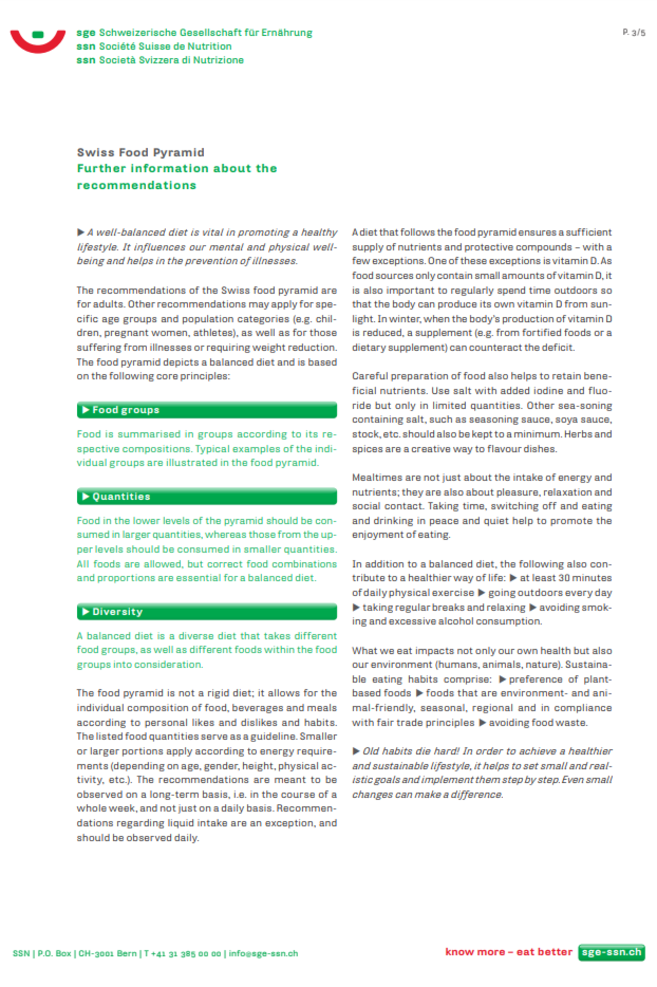 What we eat impacts not only our own health but also our environment (humans, animals, nature).

Old habits die hard! In order to achieve a healthier and sustainable lifestyle, it helps to set small and realistic goals and implement them step by step. Even small changes can make a difference."

What you eat isn't just important to your own personal wellbeing; it's important to the environment as well. The fact is, one-quarter of the climate impact of Swedish households comes from the food we eat – or throw away. Economising on the Earth's resources will ensure we have good food to eat in the future. That's why we've devised this advice on how you can eat sustainably – to the benefit of both your health and the environment. So that you don't have to choose.

High fibre vegetables are an eco-friendly choice. They have less of an impact on the environment than salad greens and can be stored for longer.

Cereals have a relatively small climate impact and fields aren't sprayed to a particularly great extent. Only a very small number of chemical pesticides can be used in organic farming. Rice is one of the crops causing the greatest emissions of greenhouse gases. From this perspective, other grains and potatoes are better choice for the environment.

Seafood is largely a wild resource that is at risk of being depleted. There are also fishing methods and fish farming methods that can harm the environment. So not eating too much fish is good for the environment. Choosing sustainable fish makes it possible for us to continue eating fish in the future.

Dairy products come from cows, which release methane gas. This is bad for the environment, so it's a good idea not to consume too much cheese or other dairy products. At the same time, grazing animals can do their bit for the environment. In Sweden, for example, they help to produce a rich agricultural landscape and ensure that natural pastures are kept open. This benefits lots of species under threat. Ecolabels such as "organic" help you choose foods produced with the environment in mind.

Of all foods, meat has the greatest impact on our climate and environment. This is why it's important for us to cut back on meat and be careful about what meat we do choose to eat. Poultry has the smallest impact on our climate, followed by pork. Beef and lamb have the greatest impact, but free range beef and lamb can also have positive effects. In Sweden, for example, they help to produce a rich agricultural landscape and ensure that natural pastures are kept open. This benefits lots of species under threat. Sweden is also in a good position when it comes to animal welfare and the use of antibiotics."

Find your way to eat greener, not too much and to be active! 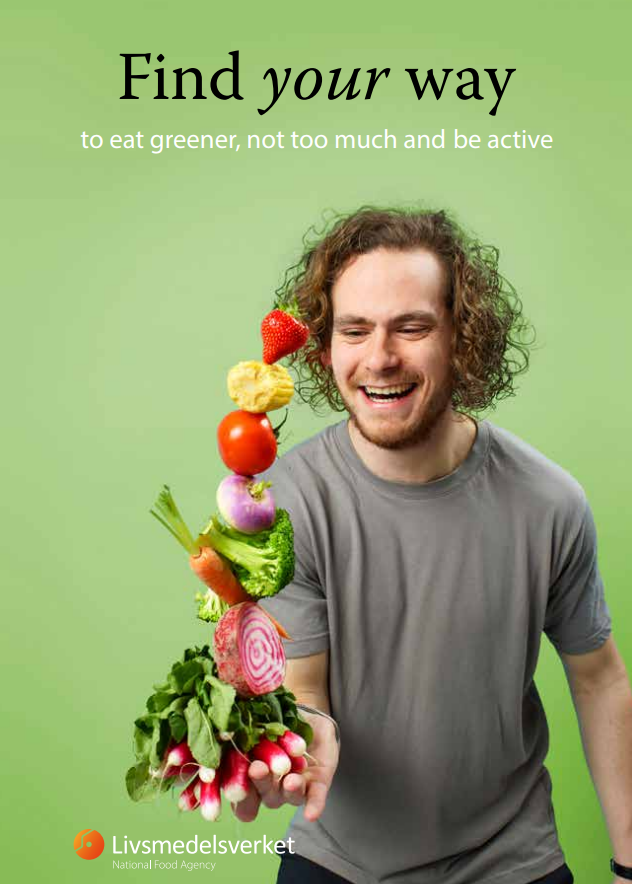 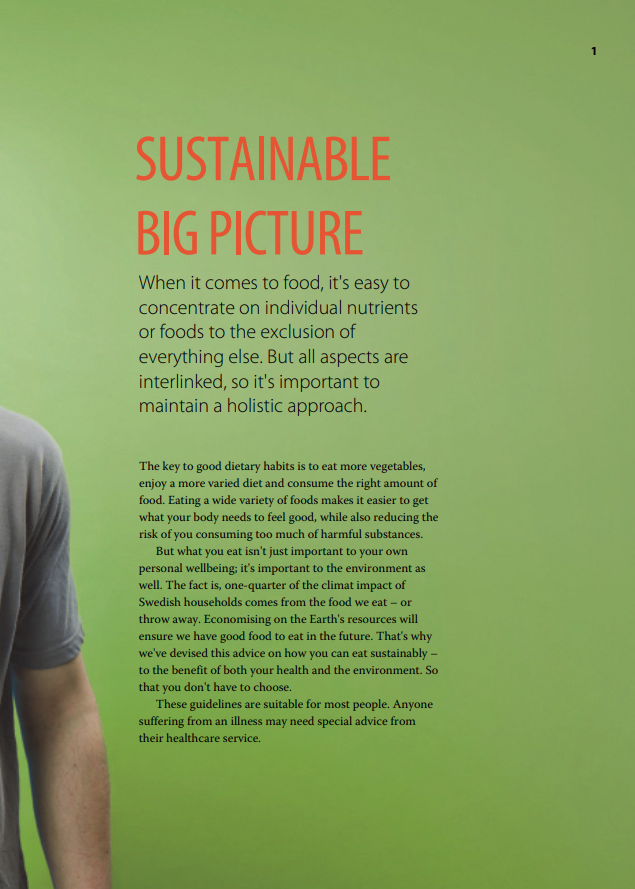 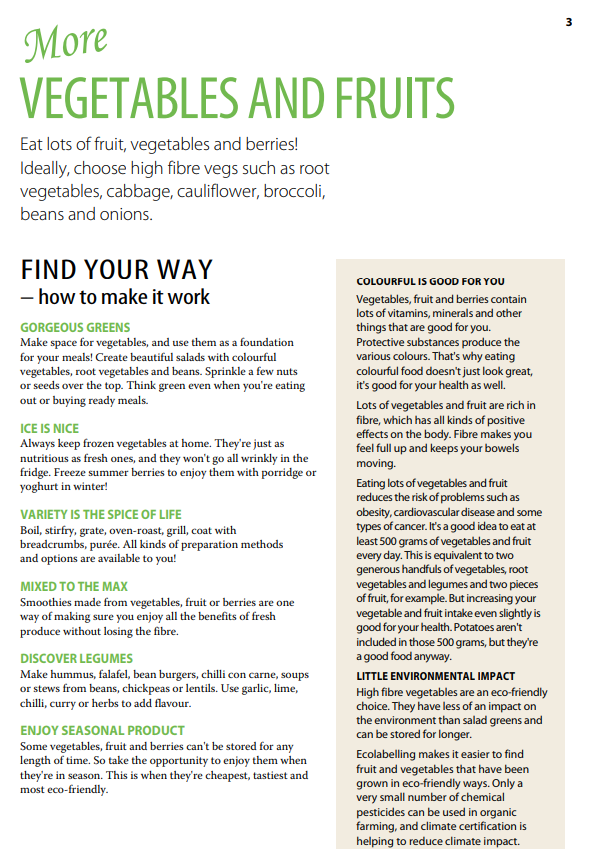 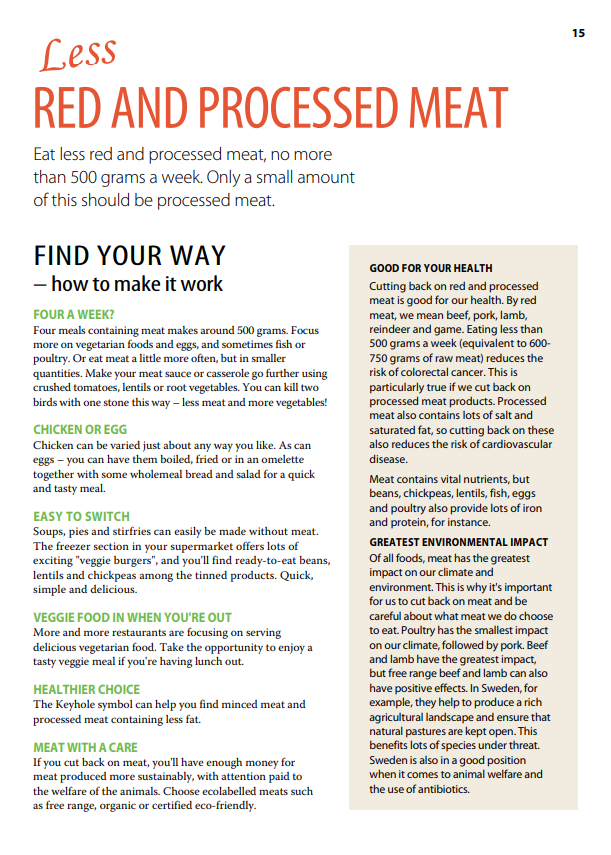 This article includes an up-to-date list of those countries that have succeeded in formally incorporating sustainability messaging within their national dietary guidelines.

It also provides a summary of each country's messaging by quoting relevant sections from their respective guidelines.

n.b. countries with accompanying, or non-government mandated, documentation that relates to the environment have not been included here, including Australia, which has a sustainability appendix within their guidelines.

Could
New Zealand be next?

The production and consumption of food, including processing, packaging, transportation, and waste disposal all affect our environment. Damage to the environment then impacts our ability to produce food.

Most water used by humans is incorporated into the food that we eat (e.g. water for crops, pesticide and fertilizer production, animal uses, processing). In general, plant-based foods such as fruit, vegetables, legumes and grains use less water in their production than animal foods, such as beef. Greenhouse gas emissions (contributing to climate change) are also lower in plant-based versus animal-based foods. 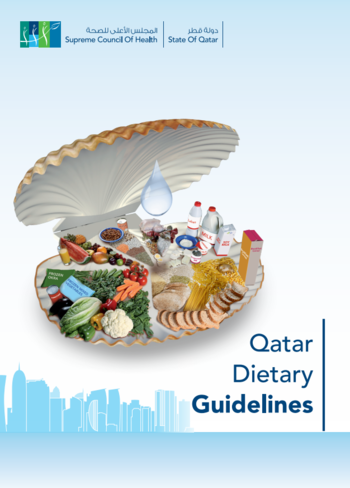 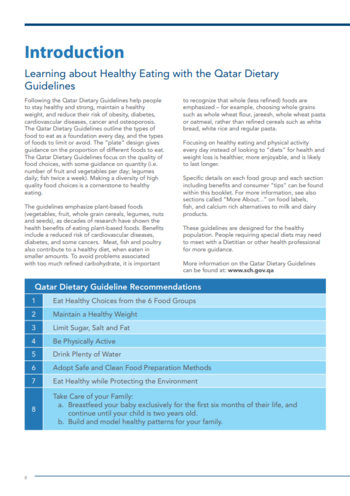 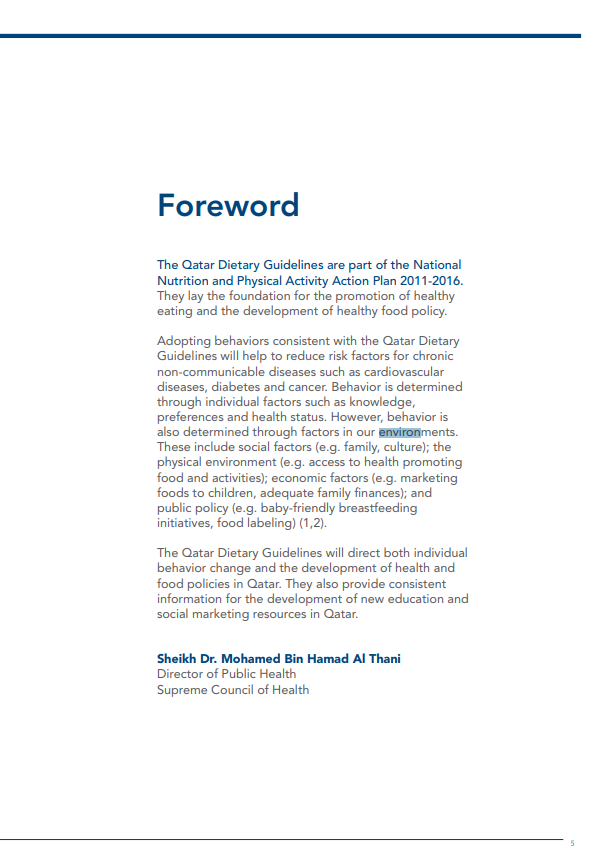 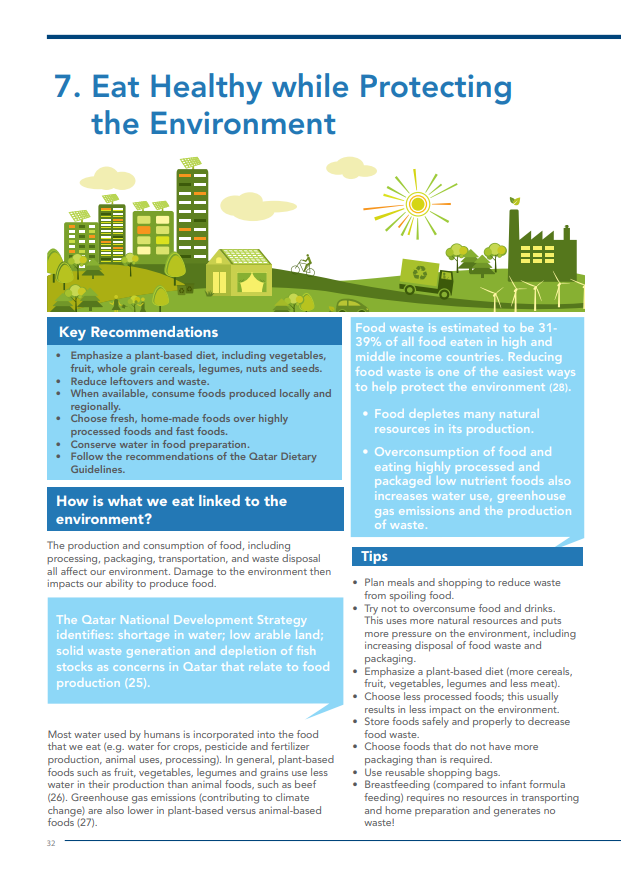 What you eat is not only important for your own health, but also for the environment.

The production and consumption of food are responsible for a large percentage of Norway’s greenhouse gas emissions.

Reduced food wastage and a more plant-based diet will contribute to reducing the impact on the environment."

Dietary recommendations need to take into account the impact of the means of production and distribution of food on social justice and environmental integrity Depending on their characteristics, the production and the distribution of foods can be socially and environmentally sustainable, promoting justice and protection of the living and physical world, or else may generate social inequalities and threats to natural resources and biodiversity.

Choosing diets based on a variety of foods of plant origin with sparing amounts of foods of animal origin implies the choice of a food system that is relatively equitable, and less stressful to the physical environment, for animals and biodiversity in general.

Food supplies and dietary patterns based on rice, beans, corn, cassava, family farming and local economies, and living and producing in solidarity. They also promote biodiversity and reduce the environmental impact of food production and distribution.

Reduced consumption and thus production of animal foods will reduce emissions of the greenhouse gases responsible for global warming, of deforestation caused by creation of new grazing areas for cattle, and of intensive use of water. It will also reduce the number of intensive animal production systems, which are particularly harmful to the environment. The crowding of animals, characteristic of these systems, stresses the animals, increases animal wastes, requires systematic use of antimicrobial drugs, pollutes and contaminates groundwater, reservoirs, lakes and rivers, and generates diseases of animals that transmit to humans. Intensive production requires vast amounts of animal feed produced by monoculture systems producing soybeans and corn. Like all intensive agriculture, these also require intensive use of water, and of chemical pesticides and fertilisers that contaminate sources of water, degrade soil, increase pest resistance and reduce biodiversity.

n.b. only a small amount of the messaging in Brazil's guidelines has been included here.

Dietary Guidelines for the Brazilian Population 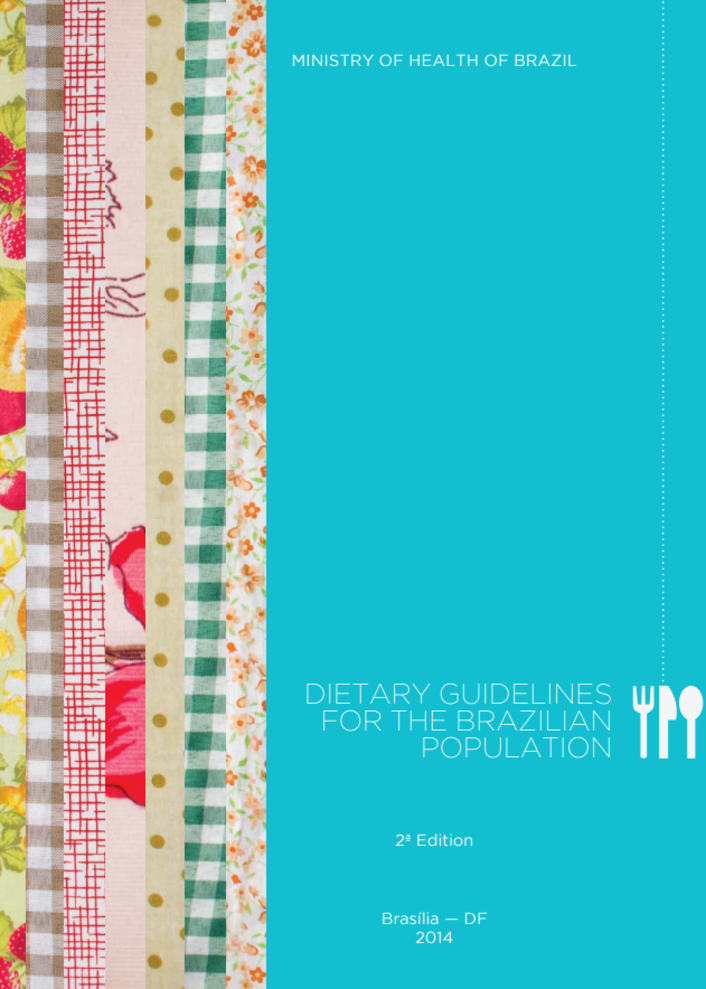 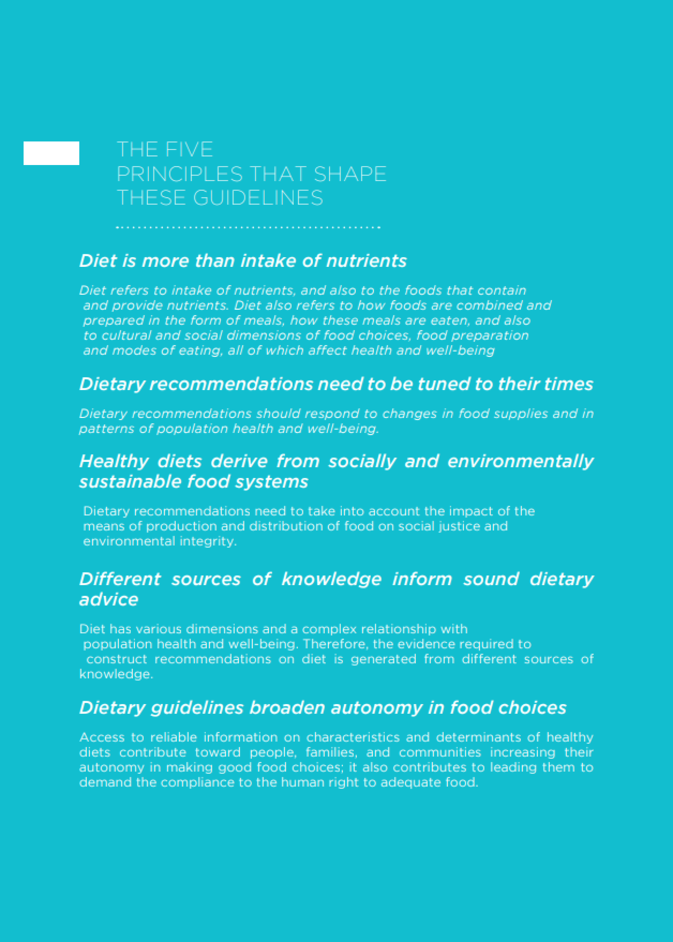 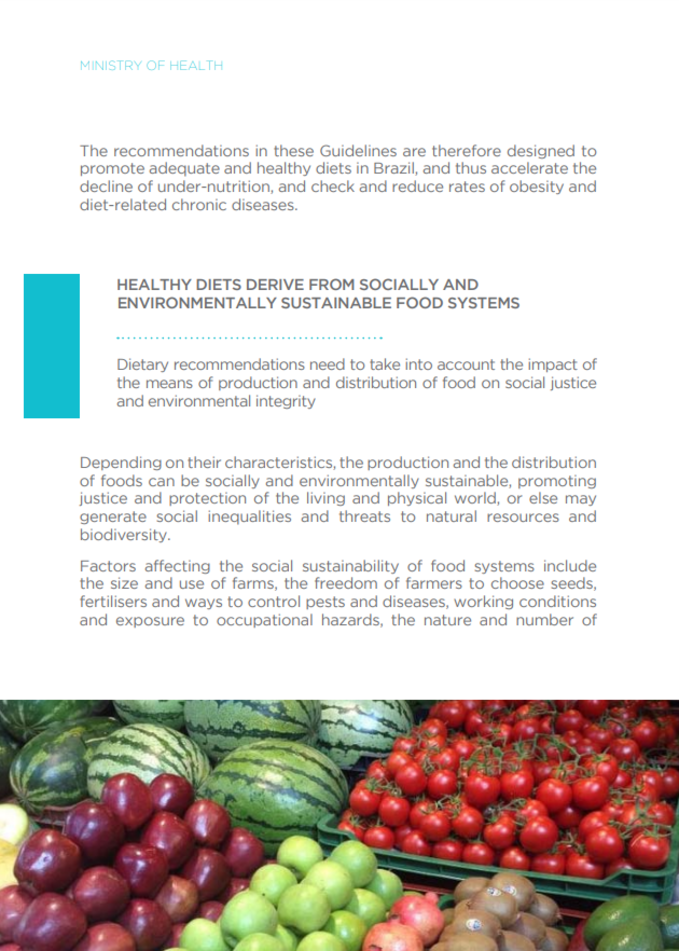 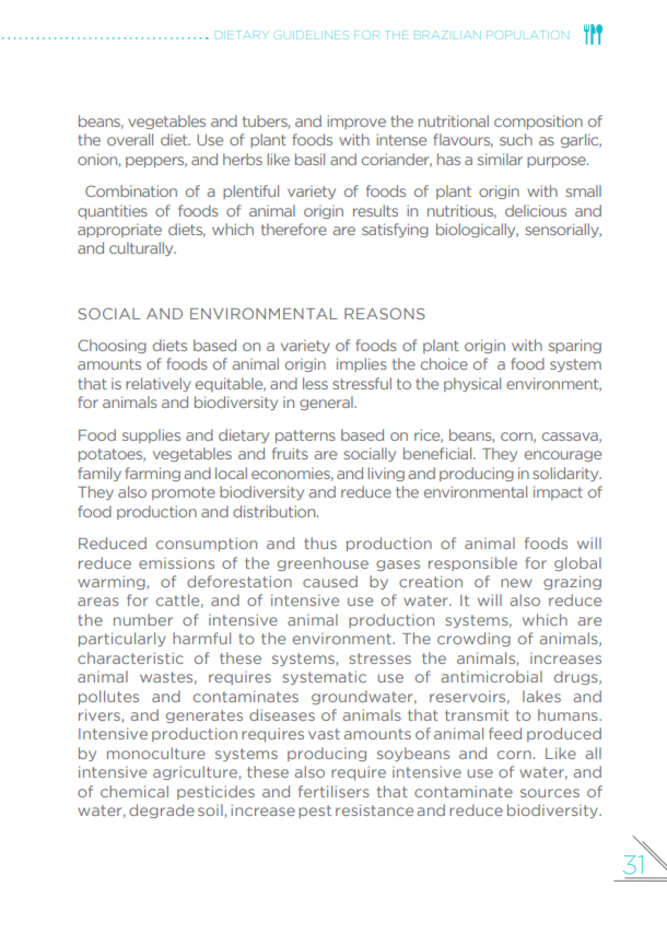 n.b. The following is taken from a press release from the German Nutrition Society, since the full guidelines are not available in English. It is our understanding that sustainability is only mentioned briefly in the German guidelines and it should be noted that the communication below is likely to include more information than what is found in the guidelines themselves.

Sustainability also plays an important role in full nutrition. Especially in the climate balance there are clear differences between animal and plant foods. Thus, the production of animal foods has a higher global warming potential. There are also differences in the climate relevance within the individual food groups. The production of meat from beef, sheep and goat causes significantly higher emissions than those from poultry or pork.

Low energy consumption in the production and processing of food also has a positive effect on the climate balance. Therefore, the DGE advises to fresh foods or foods with a low degree of processing. In addition, it recommends seasonal vegetables and fruits: cultivation in the open air compared to heated greenhouses or film tunnels saves CO2 emissions. Prolonged storage of vegetables or fruit in cold stores will cause additional emissions.

The DGE has been recommending for many years to choose mostly plant-based foods. This serves both a sustainable diet and preventative aspects. The fact that a plant-based diet promotes health preservation confirms the current data of the evidence-based diet. An increased intake of vegetables and fruits has risk reducing effects, in hypertension, coronary heart disease and stroke. An increased intake of whole-grain products, for example, lowers the total and LDL cholesterol in the blood. 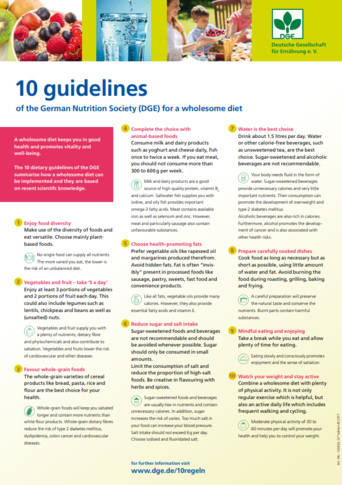